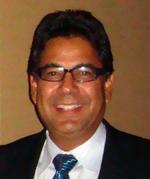 Lee started his career in the concrete industry in 1977 working for successful residential contractors in the Arizona market. His experience included form work, concrete placement and finishing, estimating, project management, and operations management.

In 1989, Lee cofounded Hardrock Concrete Placement Co., Inc. with his brother Larry. They started with small commercial projects and their offices were based out of their childhood house in Peoria. As revenue started to grow, so did their need for office space. In 2000, Hardrock built and moved into their current office, a concrete tilt-up building, in Phoenix.

Lee has always been a “hands on” owner and stays involved in all aspects of his organization, including Accounting, Estimating, Project Management, Purchasing, Business Development, and Field Operations. Because of Lee’s past experience in field operations, it is not uncommon for him to visit a job site and “put on his tool belt” to lead by example and educate his crews.

Lee’s vision, experience, hard work, determination, dedication, and leadership have been the most significant factors in Hardrock’s success over the past 26 years in business. 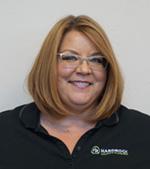 Cindy joined Hardrock in 1998 as an Estimating Administrator and Lee Lopez’s Executive Assistant. Cindy was promoted to the Supervisor of the Project Coordination team in April 2000. In 2002, Cindy moved to Tucson for a year to manage the Tucson office and update their procedures. During this time, she started working on a large project job site and began learning Estimating which was a natural transition with her appraisal background.

Cindy has remained flexible in her duties at Hardrock. Her background and experience allow her to adapt to the changing needs of the organization and step in to help different areas and departments as needed. 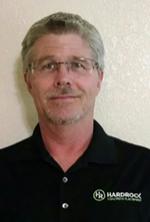 In 1980, Dean earned a Bachelor of Science Degree in Accounting from Minnesota State University Moorhead. In 1981, he became a Certified Public Accountant in the state of North Dakota.

Dean joined Hardrock as the Controller in 1998 and is involved in the financial aspects of other Lee Lopez owned entities. He is a Certified Public Accountant in the state of Arizona and has worked in both public and private accounting since 1981. He is responsible for Hardrock’s financial operations ensuring that the company’s financial performance is properly measured and reported on a timely basis. He is extremely proud of the hard work and dedication shown by the individuals comprising the Hardrock accounting team. 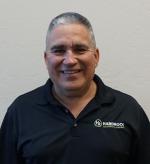 Pablo joins the Hardrock team with a very diverse background in management and safety. He is a highly respected Air Force Veteran with a thirty plus year tenure between active and reserve Fighter Wing combat units. He has experience in international, national, and regional field and management levels. He retired as a Command Chief Master Sergeant.

Leadership roles range from maintenance Chief to superintendent in Bagdad Sather AB Iraq. In the last 4 years, he was involved in logistics and safety cargo operation in Afghanistan moving thousands of pounds of cargo throughout the theatre for US troops in forward operating bases.

He has a unique and innovative approach to the many disciplines in Safety and Risk Management including the disciplines of cost containment, manpower, and material savings. He continues to demonstrate expertise in team building, training, leadership, quality assurance, safety and equipment operations.

Pablo has been an OSHA U.S. Department of Labor Authorized Construction Instructor for the last 12 years including spending 6 years performing safety in the residential and commercial private sectors.

He received a Bachelor Degree from Park University in Management and has completed various military Senior Leadership courses in preparation for challenging positions throughout his career.

Mr. Valverde is a member of the American Society of Safety Engineers and continues to expand his knowledge in the field of safety. 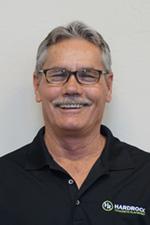 Terry started his career at Hardrock as a carpenter in 1997. He was promoted to Foreman in 1998. Terry’s supervisory skills earned him the title of Superintendent in 2001. After completion of several successful projects, Terry became a Hardrock Project Management in 2005. Terry’s experience and hard work earned him the position of Operations Manager in November of 2009.

Terry has also attended Rio Salado College completing courses in AutoCad, Advanced AutoCad, 3-D AutoCad, Drafting I, Drafting II, and Drafting III. He is ACI certified as a Concrete Flatwork Finisher & Technician, a certification he has held for the past 9 years. 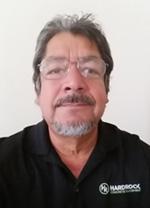 Robert joined the Hardrock team in 1997 in an entry level field position. His hard work, dedication, attention to detail, and problem solving skills quickly moved him through the ranks of carpenter, foreman, and superintendent. He remained at the Superintendent level from 2001 to 2005 when he was brought in to the office to work with the estimating team. He is now a seasoned Estimator and Project Manager. Robert has worked on projects all over the southwest for the private sector and military. 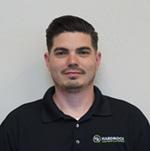 Abe started his construction career in 2003 working as a Superintendent for a large residential home builder. After gaining a few years’ experience on the residential side of the construction industry, Abe decided he would like to get into commercial construction.

In 2007 Abe began working as a Project Engineer for a Phoenix area concrete subcontractor. Abe’s hard work paid off and during his tenure at that company he was promoted to Project Manager/Estimator.

Abe joined Hardrock in 2012 as an Estimator. Abe has become a valuable member of the Hardrock team. He is the go to Estimator for our Tilt projects and has also performed Project Management roles when necessary. Additionally, Abe trains and mentors junior estimators coming up through the ranks.

Jim started in the construction industry at the age of 17, working for a national formwork and shoring company. By the time he was 20, he was building wall forms, columns and flying tables at a small forming company in the Chicago area. At 28, Jim joined the Chicago Carpenters Union. For the next 3 years, he was working for a General Contractor building hi rises in downtown Chicago.

Jim then signed on as a field technician for an international formwork company in their Chicago division. This job consisted of traveling throughout the United States helping companies learn the formwork systems for wall and deck forming, including building and training self-climbing systems, and troubleshooting any adverse conditions involved with high profile projects.

Jim moved to Phoenix and began working for a local concrete subcontractor for 3 years. He took a hiatus from construction for a few years but decided to join the Hardrock team in 2012 as a Superintendent. He worked on several structural concrete project for Hardrock as a Superintendent and in 2014 was promoted to Project Manager.

Juan started his construction career in the residential market in 2000 as a labor. He was quickly promoted to Carpenter and Lead Man. Juan continued to work for local Phoenix area concrete subcontractors for the next 5 years.

Juan joined the Hardrock team in 2005 as a Carpenter. Juan’s hard work and dedication landed him several promotions over the years from Foreman to Superintendent. Juan is a skilled equipment operator, has expertise at various formwork systems, and experienced in decorative concrete. He has managed several projects as a Superintendent in Phoenix and New Mexico.

Juan was promoted to Project Manager in 2015.

Juan also holds an OSHA 10 and 30 certifications, as well as other certifications in fall protection, excavation and trenching, and hazard communication & GHS.